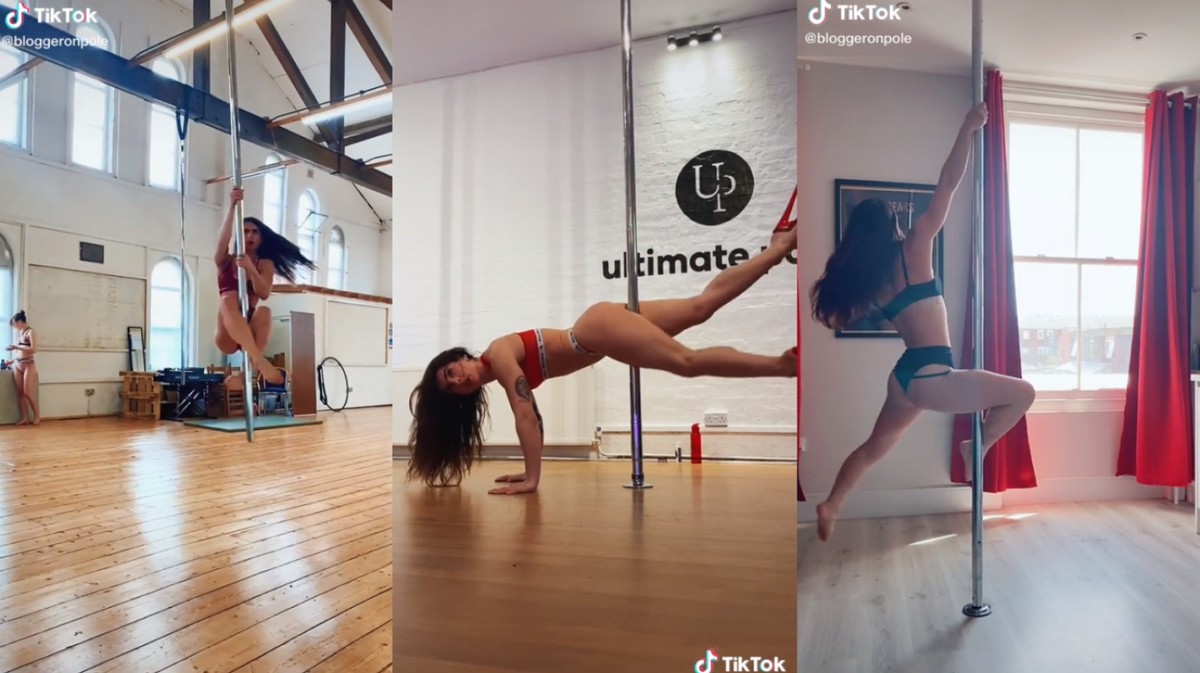 After two months using the TikTok Creator’s Fund, Carolina Are has only earned about $20 even though many of her videos during this time have tens of thousands of views. To Are, also known as Blogger on Pole, her low payouts are not just indicative of how little TikTok values its creators, but how little the internet values sex workers.

Are is a pole dancer and blogger who also has a PhD in online abuse and conspiracy theories in subcultures which discussed high profile criminal cases. Currently, she is an online moderation researcher at City, University of London. As a pole dancer, Are’s issues with TikTok extend beyond just the payouts for her videos.

In screenshots shared with Motherboard, Are’s Creator Fund Dashboard shows that her estimated total balance for TikToks is about £15, or around $20. Are joined the Creator Fund at the end of March. Since that time period, Are has posted 36 TikToks and none of them have received under 10,000 views, with most receiving 30,000 to 50,000. Even if Are is only being paid for the views accrued within the time she has been in the Creator Fund, it paints a pretty bleak picture of using TikTok as a way to make money.

Motherboard reached out to TikTok for details on how the TikTok Creator’s Fund allocates funds and they did not respond.

“According to a lot of people, I deserve to get raped because I show my body, and the platform puts the onus of protecting yourself on you.”

Are said that despite being assured more than once by representatives from TikTok that the content on her account does not violate TikTok’s guidelines, she has been suspended from the platform four times.

“I went on TikTok precisely because I just found Instagram very difficult to deal with and very difficult to use for growing a profile and kind of having an online presence,” Are said. “But then in February of this year, I just started really, really struggling.”

Although Are pole dances, she’s wearing unitards or workout gear in all her videos, which often show her practicing difficult moves. Despite complying with TikTok’s community guidelines on nudity, which go so far as to ban the implication of nudity as well as nudity itself, Are still has issues with getting her videos on the platform.

“Some of my videos are like the least sexy thing you will find, because you can see that I’m obviously training,” Are said. “There are community guidelines, right? And you follow them and it’s like, okay, you don’t want sexual intercourse. Fine. I will not post sexual intercourse. I will not post my genitalia. But if I post videos that comply with community guidelines and then it gets deleted anyway, then what’s happening?”

Are also said that the payouts she has received from the TikTok creator’s fund don’t seem to match the level of virality she experiences.

“What’s really upsetting is that because of the way their algorithm works, your content is propelled to absolutely everybody,” Are said. “So a lot of people see your content, but you don’t see the fruits of that content because you’re not paid for it that much through the creator fund.”

“Platforms have been after ass for ages, but they don’t use the same strength against content that is really, really harmful to viewers and to users.”

“Because you are shown to so many people, not all of those people like your content, and some of them are really abusive,” Are said. “So according to a lot of people, I deserve to get raped because I show my body and the platform puts the onus of protecting yourself on you.”

Are’s relationship with TikTok is one she’s seen time and time again on social media. She moved from Instagram to TikTok after the Instagram started hiding sex workers and pole dancers from the Explore page.

This is a cycle of the internet that’s very familiar to Are: sex workers flock to a platform, make it popular, and then after the platform is profitable they implement punishing policies on sexual content, making it impossible for sex workers and anyone else who makes sexual content to use that platform. Are says that platforms are more willing to go after nudity and expressions of sexuality rather than harassment and hate speech, which can be actively harmful on and off the internet.

“What really pisses me off the most is that platforms that let hate speech and harassment and violent content thrive on social media so much that the Capitol was stormed in January, and people are like, oh, we wonder how that happened,” Are said. “Well, platforms have been after ass because it makes them look good to moderate ass for ages, but they don’t use the same strength against content that is really, really harmful to viewers and to users.”

“I’ve been communicating with Instagram throughout 2019 and 2020 and 2021 as well. And when the terms of use came out, I asked their press department and I was like, why are you so anti-sex worker essentially? And why are you so anti nudity? The response I got was that there were a lot of platforms where people post nudity and they didn’t feel like Instagram was one of them. But actually, that is a lie.” Are said. “As it happened on Facebook, as it happened on Tumblr, the space for nudity and sex is shrinking online.”

How to make money with…

How to sell clothes online…

Do you know how to…